You are here: Home / Blogging Tools / Backup Buddy Review: Backing Up Your WordPress Site Is Easy And Automatic With Backup Buddy

A while back I wrote a post on this site talking about how important it was to backup your WordPress site on a regular basis.  Why should you be backing up your site on a regular basis?  There are a variety of reasons. Your site could get hacked, you could have an update of a plugin or WordPress go wrong,  or you could have a host “accidentally” cancel your account.  All of these things can be catastrophic if you don’t have a backup of your database and site files.

The problem is setting up regular backups to run isn’t always an easy process, especially if you’re not very tech-oriented.  A lot of the plugins that are supposed to make backing up easy either don’t work very well, don’t work at all, or take a masters degree in computer science to figure out how to setup correctly.

I had been using a backup plugin for the last 3-4 years that worked OK, but it had problems from time to time. There were times that it would just stop firing and backups would stop happening.  I had the backups being emailed to my Gmail account as well, and sometimes they would just stop sending when the file size was too large.   That backup solution also only backed up the database, the site files I had to manually back up on a regular basis, and since it was a manual process it tended not to happen as often as it should.

A few weeks ago I was talking to a blogging colleague, Tom over at CanadianFinanceBlog.com, and I asked him what he was using to backup his sites.   Since he runs multiple sites his backup solution has to work well, or else he’d be in trouble.  He told me he was using Backup Buddy from PluginBuddy.com as his main backup plugin.  It’ s a premium plugin, but there’s a reason it costs money. It works, and it works well.

On Tom’s advice I went ahead and bought a developer’s version of the plugin since I needed multiple licenses for all of my sites, and installed the plugin that same day on 11 sites.  I’m glad I bought the plugin because it has made the backup process so much easier and pain free than it was before.  Let’s look at some of the things it lets you do.

The main reason I’m using Backup Buddy is because it makes it simple and easy to do regular backups of your site. How easy?  After setting up your backup locations in initial setup, all you need to do to backup is hit a button to backup the database, or another one to do a full backup of the entire site.

Doing a full site backup was tough for me to do previously because some of my sites have large databases, and tons of content to backup.  They were just too large and other plugins were choking when scheduled backups happen.  Backup Buddy had no problems with it and actually completed a backup pretty quickly.  It can store a backup locally in the WordPress, or remotely archive your files.

One key thing to have with a backup plugin is scheduled backups.  With Backup Buddy you can schedule backups for your whole site, or for database only.  I schedule regular nightly database backups, and then a weekly full site backup.  You can set the backups to happen at whatever interval you want it to be at, daily, monthly, twice a month, hourly, whatever.

You can also set how many backups you want the plugin to save so that you don’t run out of space.

Another great feature of the plugin is that it will allow you to backup remotely with your Amazon S3 account, Dropbox, an FTP site of your choice or by sending a backup to an email address.

I’ve used it with my Amazon S3 account that I was already using for my CDN, and it has so far worked seamlessly.  You just enter your login credentials, where to back it up at the service and set it as a backup location. Then when you’re setting up a scheduled or manual backup, you can choose that remote location as the backup location.

I’ve also got email backups setup to send to my Gmail account where I archive backups for a certain time. 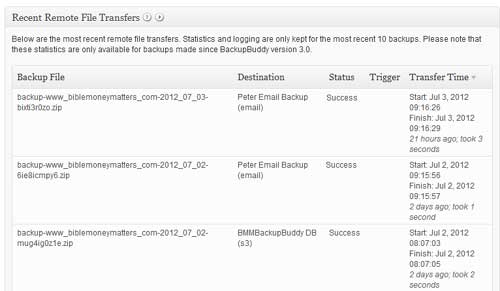 You can check your dashboard to make sure the updates went through.

Migrate  Or Restore Your Site

Another great feature of the plugin is that it will allow you to migrate your site to another server, or if you’ve had problems with your site, restore it to the same server.  Restoring from a backup is a super simple process.  All you have to do is grab their import php file, put it in the same directory as your full site backup, and then browse the url of the import file, and it will walk you through restoring the site.  Simple!

I know of others who have used this plugin when buying sites from other people. They install the plugin on the remote server, do a backup, and then restore/migrate the site to their own server.

Finally the plugin does a malware scan of your site for you using Sucuri Security.  You just go to the malware scan link, and it  will scan your site for malware, tell you if your site is blacklisted. Very helpful, especially if you think your site may have been compromised.  And if it is compromised?  Just go to one of your previous sitebackups to clean things up!  Piece of cake!

I think Backup Buddy is one of my new favorite plugins for WordPress users, I’m not sure what I did without it!  It gives you a simple and easy to use backup and site restoration solution that most likely save you if you ever have your site hacked, files corrupted or otherwise lose your site files.  It’s well worth the small cost.  I’d highly recommend it to anyone who wants to ensure the safety of their site files and database data.

This site uses Akismet to reduce spam. Learn how your comment data is processed.

The information contained in MoneyWithABlog.com is for general information or entertainment purposes only and does not constitute professional financial advice. Please contact an independent financial professional for advice regarding your specific situation.

In accordance with FTC guidelines, we state that we have a financial relationship with some of the companies mentioned in this website. This may include receiving access to free products and services for product and service reviews and giveaways.

Any references to third party products, rates, or websites are subject to change without notice. We do our best to maintain current information, but due to the rapidly changing environment, some information may have changed since it was published. Please do the appropriate research before participating in any third party offers.